According to a recent poll, I’m Arizona Voters’ favorite candidate…

…But I’m not yet favored to win.

How Can Both Those Things Be True at the Same Time? 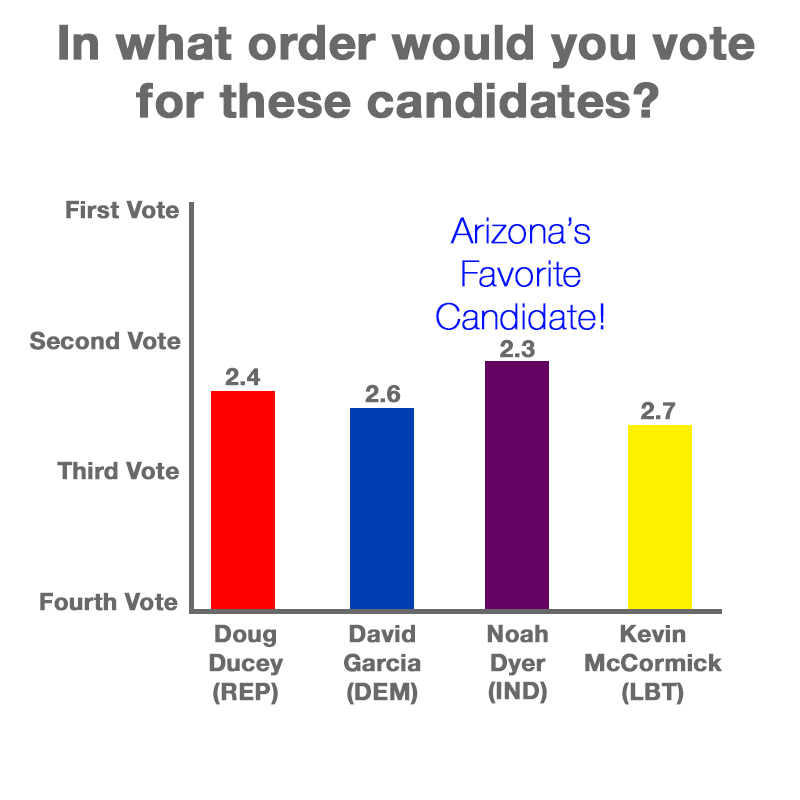 A second poll that excluded the Libertarian candidate had me favored even more strongly.

However, if the election were today, I’d only receive 18.9% of the vote, with most of the votes going to the major party candidates.

How is that possible?  Well basically, as of today, I’m the 1st choice for almost 20% of the voters.  But of the remaining 80%, I’m almost universally the 2nd choice, whereas Doug Ducey and David Garcia are very frequently voters’ last choice.

What Does It Mean?

Less than 9 months ago, no one in the political world knew my name.  Today, with very little money and an excellent team of dedicated volunteers, almost 20% of Arizonans are ready to give me their one and only vote.  This is incredibly humbling and a true honor.

In a tight race, which my race is shaping up to be, as little as 25.1% can win, but the winner will more likely need 35-40%, as the Libertarian candidate is not likely to gain significant traction. If I’m able to continue capturing votes from Democrats and Republicans equally, then we’re over half way to the goal.  Think about that.  Less than halfway through the race and with very few resources, we’re already over halfway to beating the major parties!

Lastly, this data suggests that I am not likely to pull significantly more votes away from one party than the other, thereby handing the race to the other candidate most unlike me.  That’s not surprising because I’m unlike any other candidate!

We need to keep up the momentum.  We need to win voters from the broken parties every day.  If we can get another 20% of the voters, we’re almost guaranteed a win.

There are 2 things you can do to make sure that happens:

Again, thank you for your support!  It means a lot, and it’s making a difference!